$109 Buy Back Special on your old aluminum windows!

You may have noticed that clear-glass buildings are springing up in cities across the United States. The reason dates back to some 1970s-era research designed to make windows more energy-efficient.

In fact, this line of research turns out to be one of the biggest success stories to come out of the last energy crisis — and there are lessons to be learned, as America once again ramps up its energy research.

The technology is called low-emissivity window coatings, and these invisible films are the reason that architects in American cities are gleefully building those transparent glass towers.

One example is on a downtown street in Portland, Ore. When the 22-story building is finished, it will be a shimmering tower, blending into the blue of the Portland sky.

Architect Glenn Justice, who helped design the tower, says it’s all about creating a feel of transparency, into and out of the building.

“For the apartments, the idea was the more view the better, so we’ve got glass all the way down to the floor and up to the ceiling. And in Portland, Oregon, that means views of Mount Hood and Mount St. Helens, and just incredible vistas,” Justice says.

The building will also be incredibly energy efficient — LEED Platinum, the industry’s term for the highest level of energy efficiency. That’s because the glass is amazingly good at keeping heat in during the winter and out during the summer. And this coated glass is not just in glitzy towers: You’ll find it in half of all new windows installed these days.

We Will Meet or Beat Any Offer! 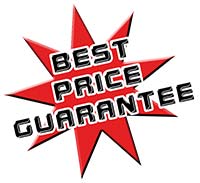